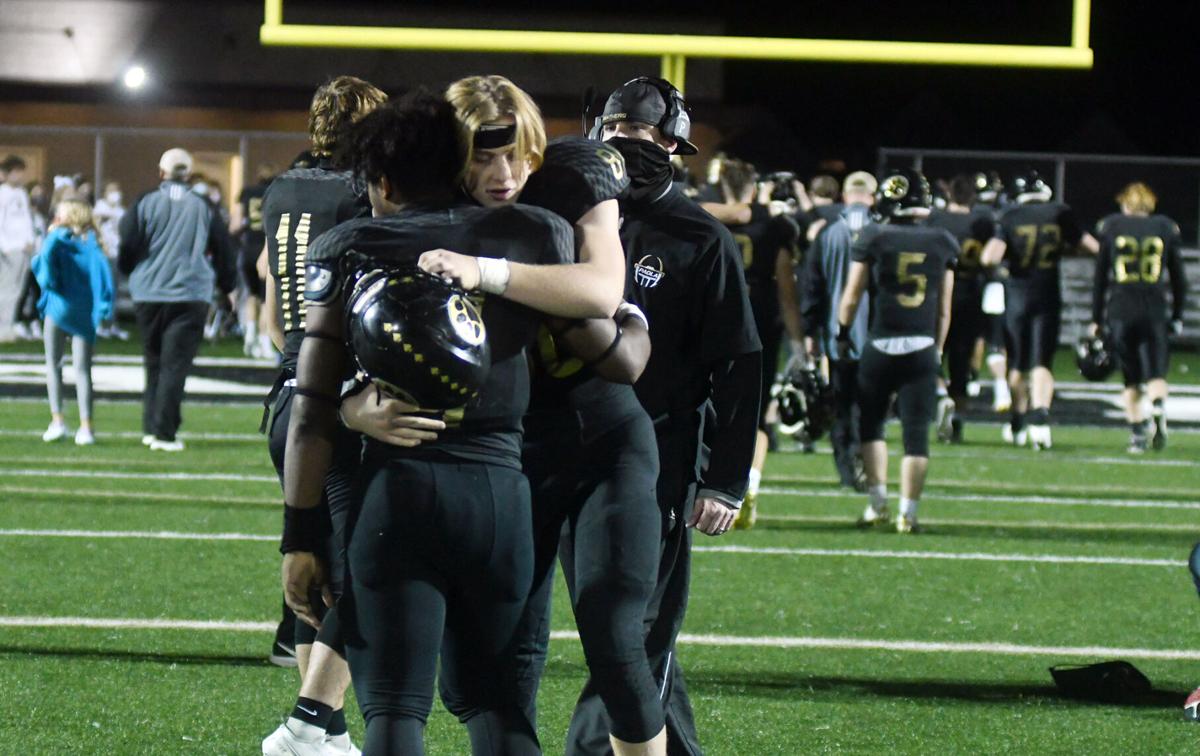 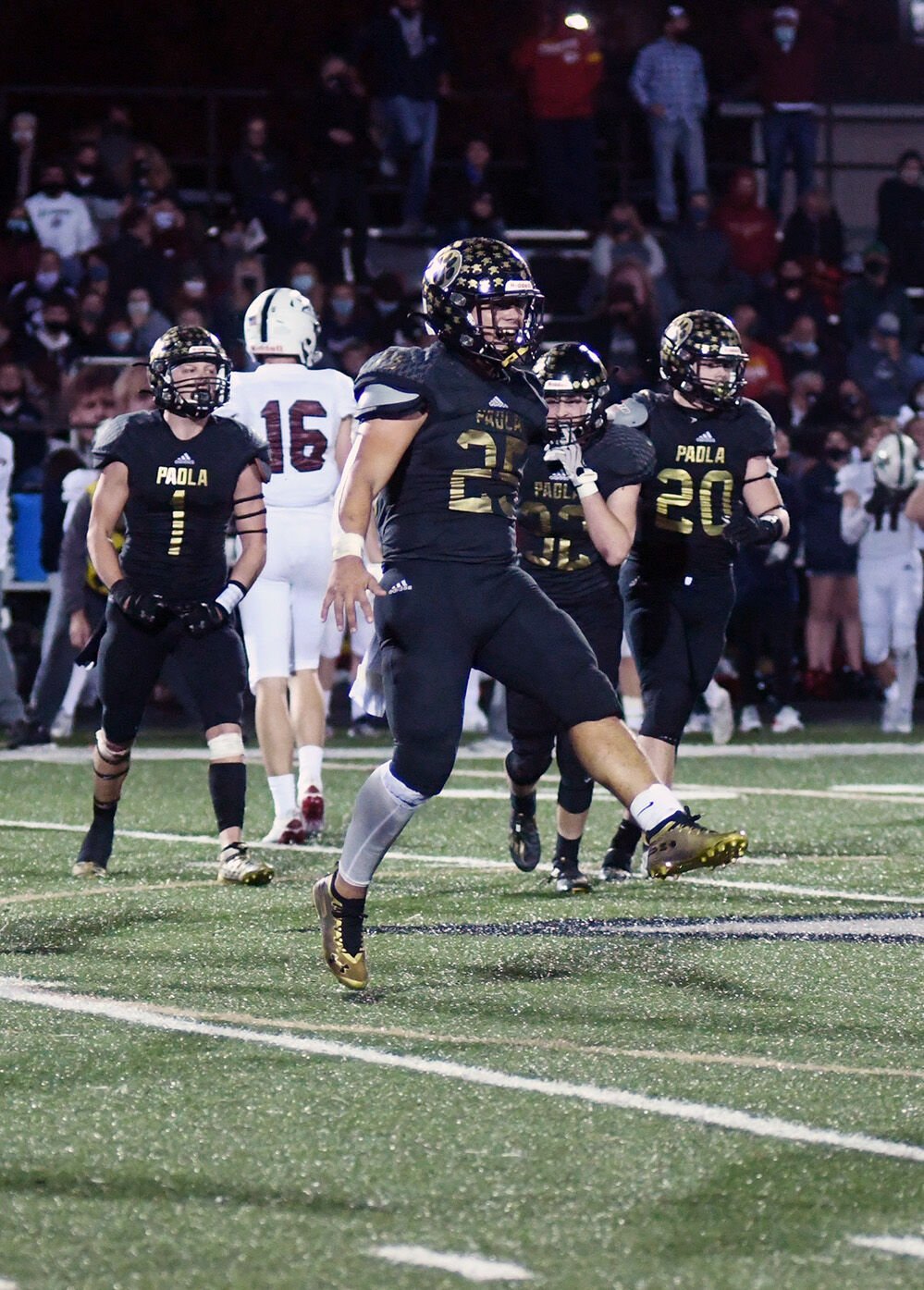 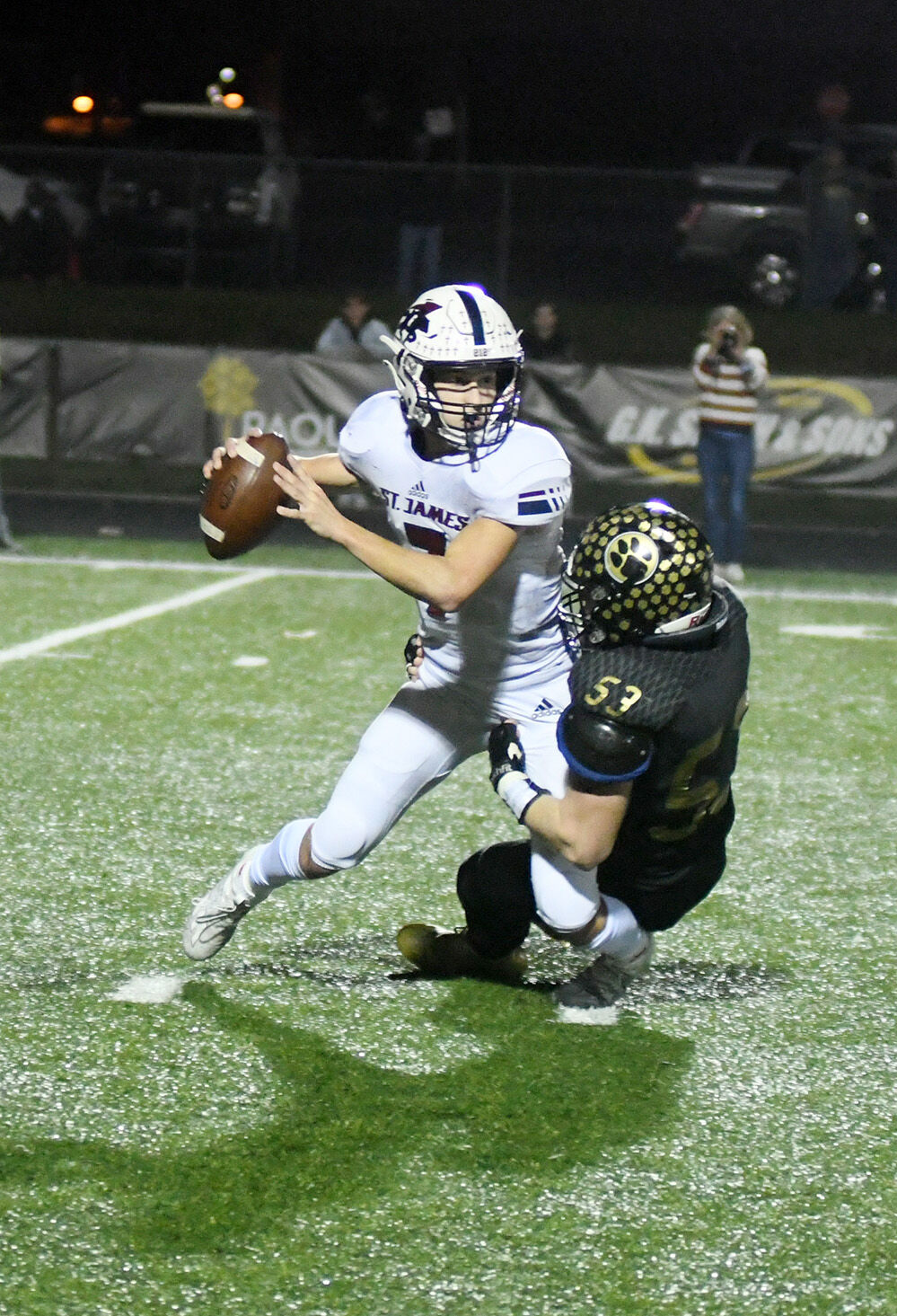 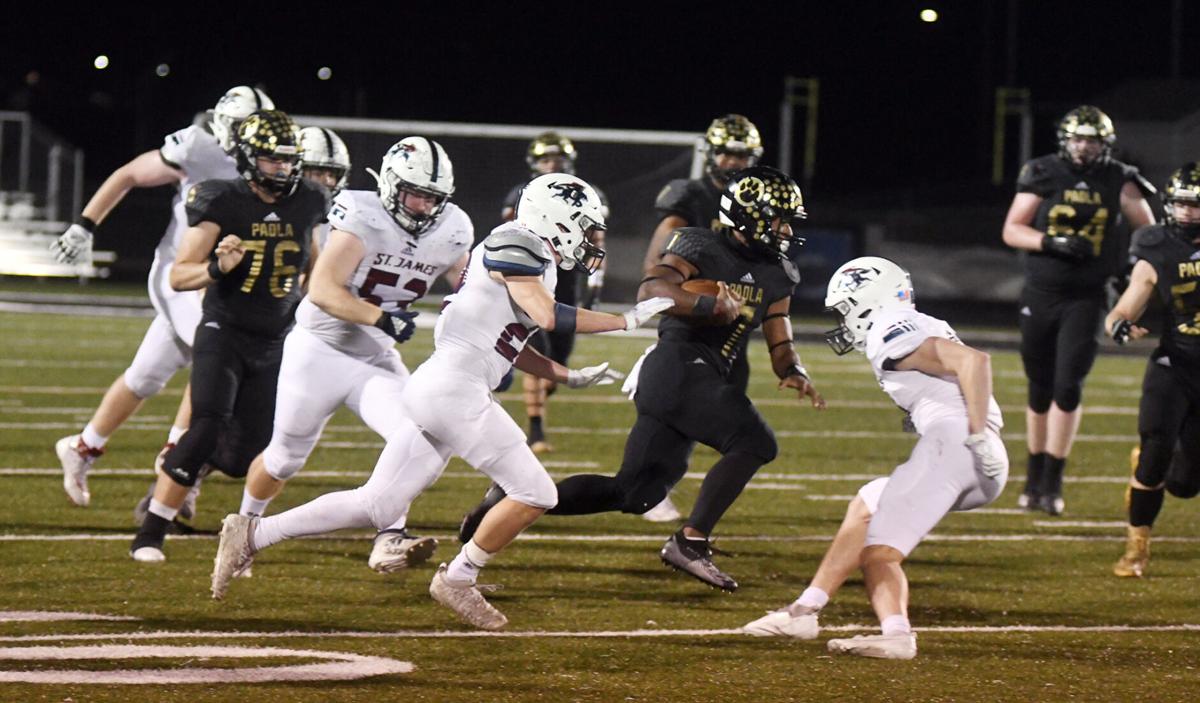 Panther junior running back Jovanni Blackie darts through a hole during a Class 4A regional playoff game against St. James. Blackie ran for 198 yards and two touchdowns. 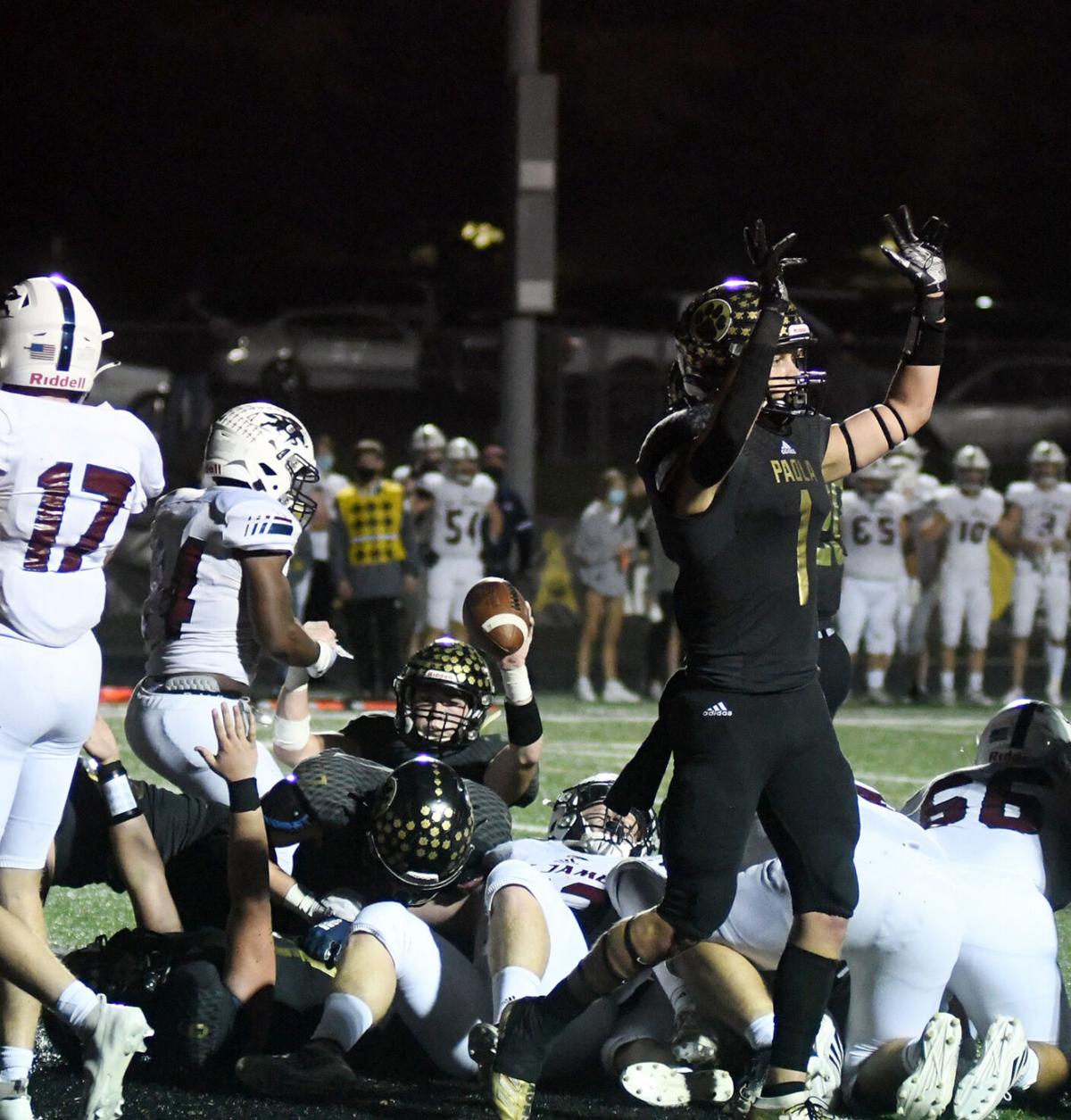 Paola senior Garrett Williams makes sure officials can see the football after scoring on a quarterback sneak. 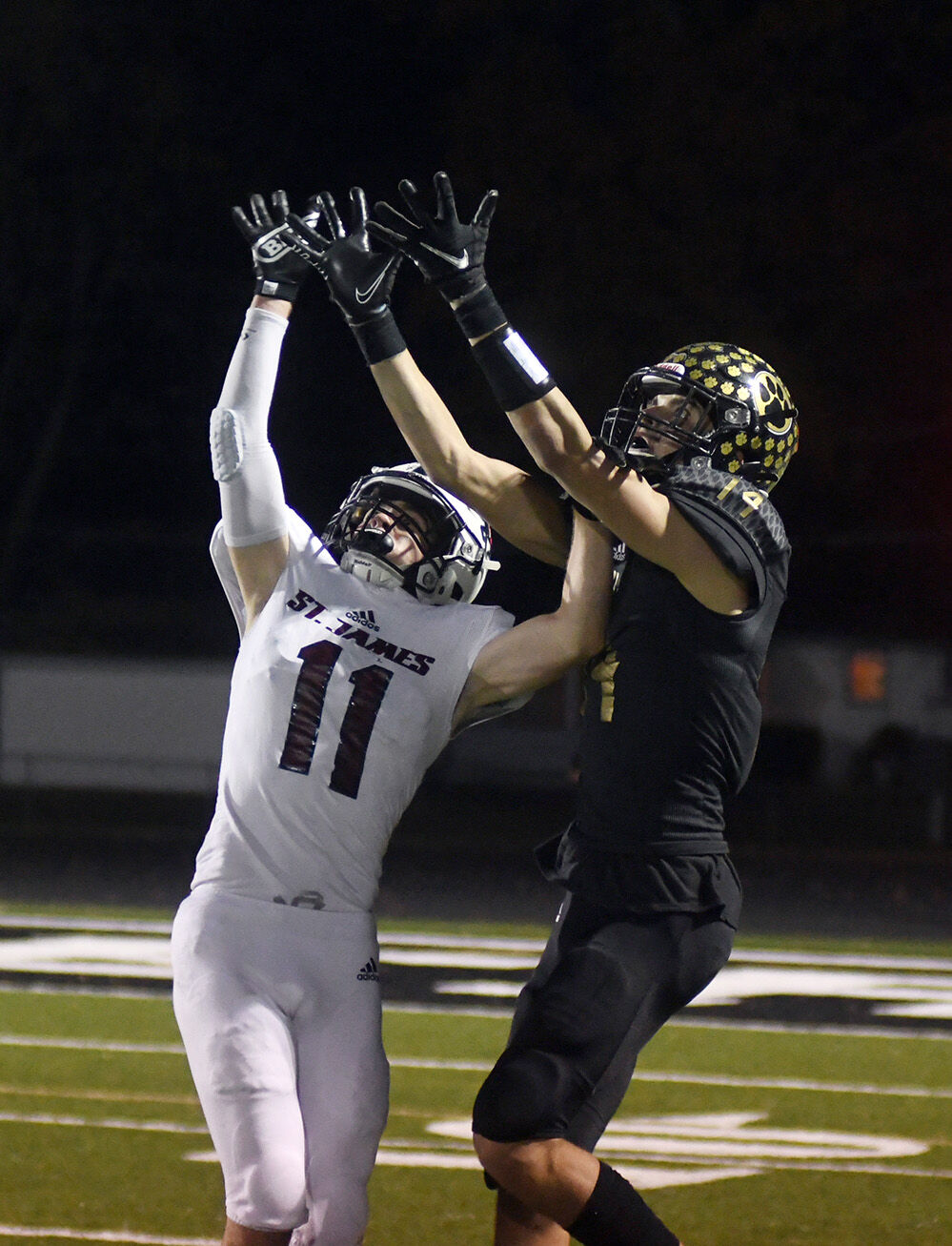 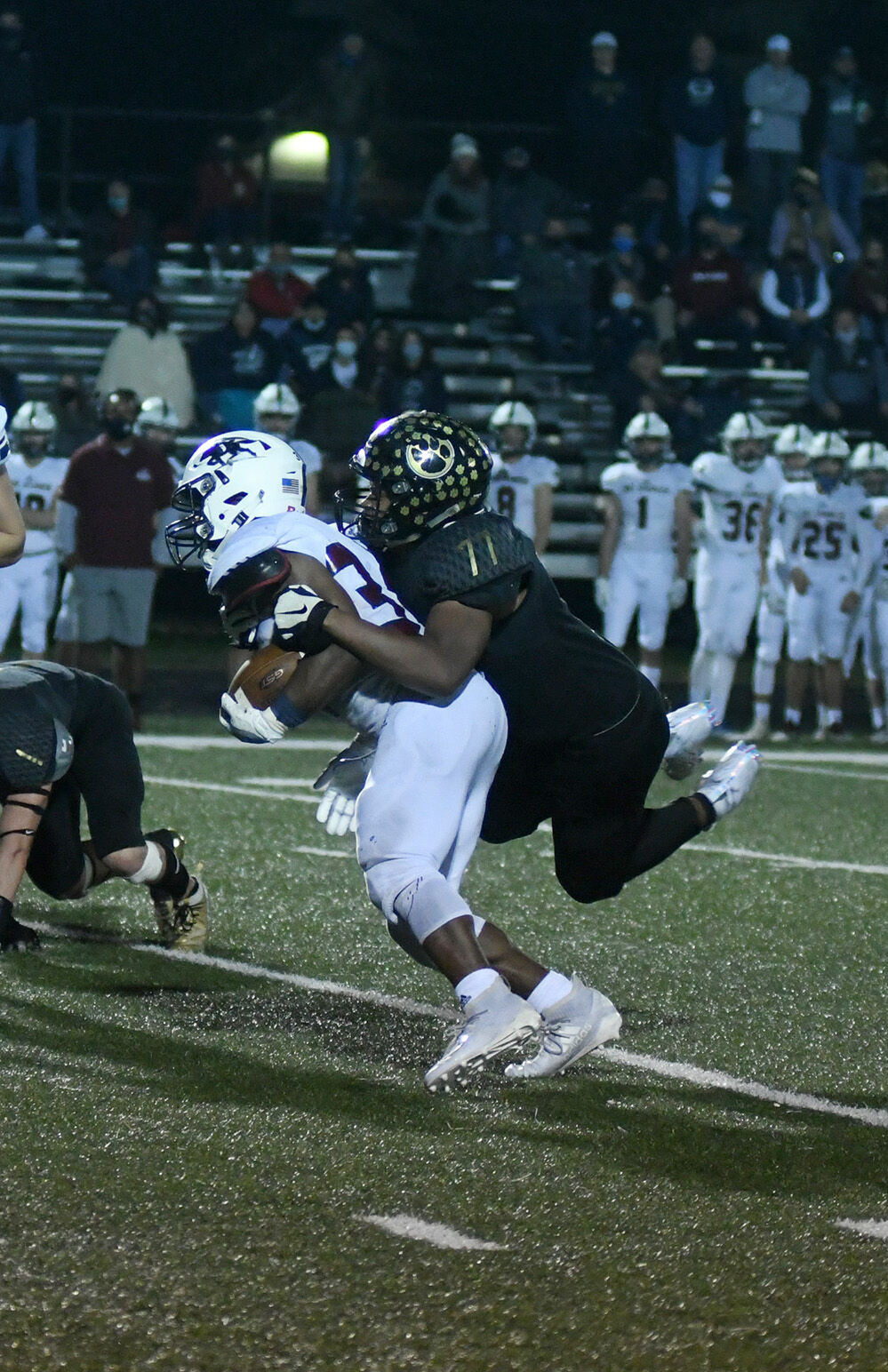 Damarius Bassett, a Paola senior lineman, runs down a St. James back to make a tackle.

Panther junior running back Jovanni Blackie darts through a hole during a Class 4A regional playoff game against St. James. Blackie ran for 198 yards and two touchdowns.

Paola senior Garrett Williams makes sure officials can see the football after scoring on a quarterback sneak.

Damarius Bassett, a Paola senior lineman, runs down a St. James back to make a tackle.

PAOLA — The Paola Panther football team fought back from a 31-7 halftime deficit against the St. James Academy Thunder in the Class 4A regional playoffs, making it a three-point game in the fourth quarter.

The Panthers were driving for a chance to win the game when the Thunder intercepted a pass, setting up a touchdown in a 45-35 heartbreaking end to the season Friday, Nov. 6.

It was the first loss of the season for the Paola Panthers, who ended the season with a 9-1 record.

The Panthers overcame a stormy start to the contest as the Thunder scored on their first play from scrimmage, and recovered an onside kick to set up another drive for a 14-0 blitz in less than two minutes.

Paola had a drive stall inside the 10-yard line, recovered an onside kick, only to have it ruled dual possession with the ball going to St. James, and had a late interception to thwart a drive that could have put the Panthers on top.

On the other side of that coin, despite being down 24 points at the half, the Panthers would continue to grind it out and claw their way back into the game with four second-half touchdown drives to make it a one possession game with eight minutes on the clock.

St. James ended a Paola drive with an interception, and drove the ball into the end zone to seal the victory.

“That was a great second half,” Paola coach Michael Dumpert told his players in the locker room. “I am very proud of you. Your character shined in the way you fought back.

“When you commit a lot to something, it hurts when you come up short,” he said. “I am very proud of you and what you accomplished this year. It would have been really easy to drop our heads. That took guts to fight back like that.”

St. James pulled a trick play out of the hat for a 65-yard touchdown on the first play from scrimmage. The Thunder had a hand-off with a fake reverse, tossing the ball back to the quarterback on a flea-flicker to an open wideout down the middle of the field for the quick score.

The Thunder struck again, recovering an onside kick. St. James kicked the ball that took a high bounce and were able to take possession at the Paola 45-yard line. St. James capitalized on the short field, scoring on a 7-yard touchdown run for a 14-0 lead.

Paola was three-and-out on its first series, punting the ball to St. James.

The Thunder added to their lead with a field goal, making it 17-0.

Paola would answer, moving the ball on the ground and through the air. Jovanni Blackie had a 9-yard run to move the chains. Williams completed a 9-yard pass to Robison. Blackie had a 15-yard run for another first down.

Williams had a 16-yard pass to Robison to convert on third down. Williams capped the drive with a 1-yard touchdown run on a quarterback sneak for a 17-7 score with 23.2 seconds left in the opening quarter.

St. James came right back with a drive of their own, scoring on a 14-yard touchdown pass, increasing the lead to 24-7 with 9:18 left in the second quarter.

Paola was moving the football when the drive ended inside the 10-yard line.

Blackie had a 31-yard kickoff return to start the second half.

Blackie broke through the line for a 47-yard gain, taking the ball to the St. James 16-yard line. He ended the drive with a 10-yard touchdown run, closing the gap to 31-14 with 10:29 left in the third quarter.

Karr ran down the St. James quarterback for a 13-yard loss. Pitzer got pressure on the quarterback who threw the ball away and was flagged for intentional grounding.

St. James punted the ball. Paola did not have anyone back and the ball took a great bounce for the Thunder, rolling to the Panther 1-yard line where it was downed.

Paola was forced to punt. St. James did not have anyone back, but the Paola punt went out of bounds.

Williams had an interception to get the ball back for the Panthers. He completed a pass to Robison for a first down. Aude had a big run for a first down and goal at the 4-yard line. Williams took the ball into the end zone from there, narrowing the deficit to 31-21.

The Panthers had an onside kick. Aude had a great kick, which the team had worked on in practice. Robison recovered the ball. Robison was handing the ball to an official when a St. James player also grabbed the ball. One official signaled the Panthers had recovered. Another official thought St. James had recovered the ball. None of the other officials saw what happened on the play and it was ruled a dual possession, giving the ball to the Thunder.

St. James scored on the possession with an 11-yard touchdown run, pushing the lead back to 17 points, 38-21.

Pitzer gave Paola a spark with a 23-yard return on the kickoff. Williams completed a bomb to Robison for a big gain. Aude had a power run through the middle of the line for 27 yards. Blackie scored on a 3-yard touchdown run for a score of 38-28 with 10:49 left in regulation.

St. James had a fumble and Aude was there to recover it for Paola. Aude made it a three-point game, scoring on a 3-yard touchdown run with 8:07 remaining.

Brakner had a big sack for Paola. St. James was forced to punt.

Paola converted on fourth down with a catch by Robison on a pass from Williams. The Panthers needed another big play on fourth down to keep the drive alive, and had a pass picked off by the Thunder.

St. James returned the ball to the Paola 5-yard line for a first down and goal. The Thunder scored on a 2-yard touchdown run with 1:59 left in the game.

The Panthers had 458 yards of total offense. Paola ran the ball 53 times for 324 yards and passed the ball for 137 yards.

Blackie had 31 carries for 198 yards and two touchdowns. Aude ran the ball 13 times for 101 yards and a touchdown.

Williams completed nine of 28 passes for 137 yards. He ran the ball nine times for 25 yards and two touchdowns.

Brakner led the Paola defense with eight tackles. Pitzer made five tackles. Meyers and Williams each had four tackles. Karr had three tackles. Caden Rhamy, Walker, Aude and Earlywine each made two tackles.