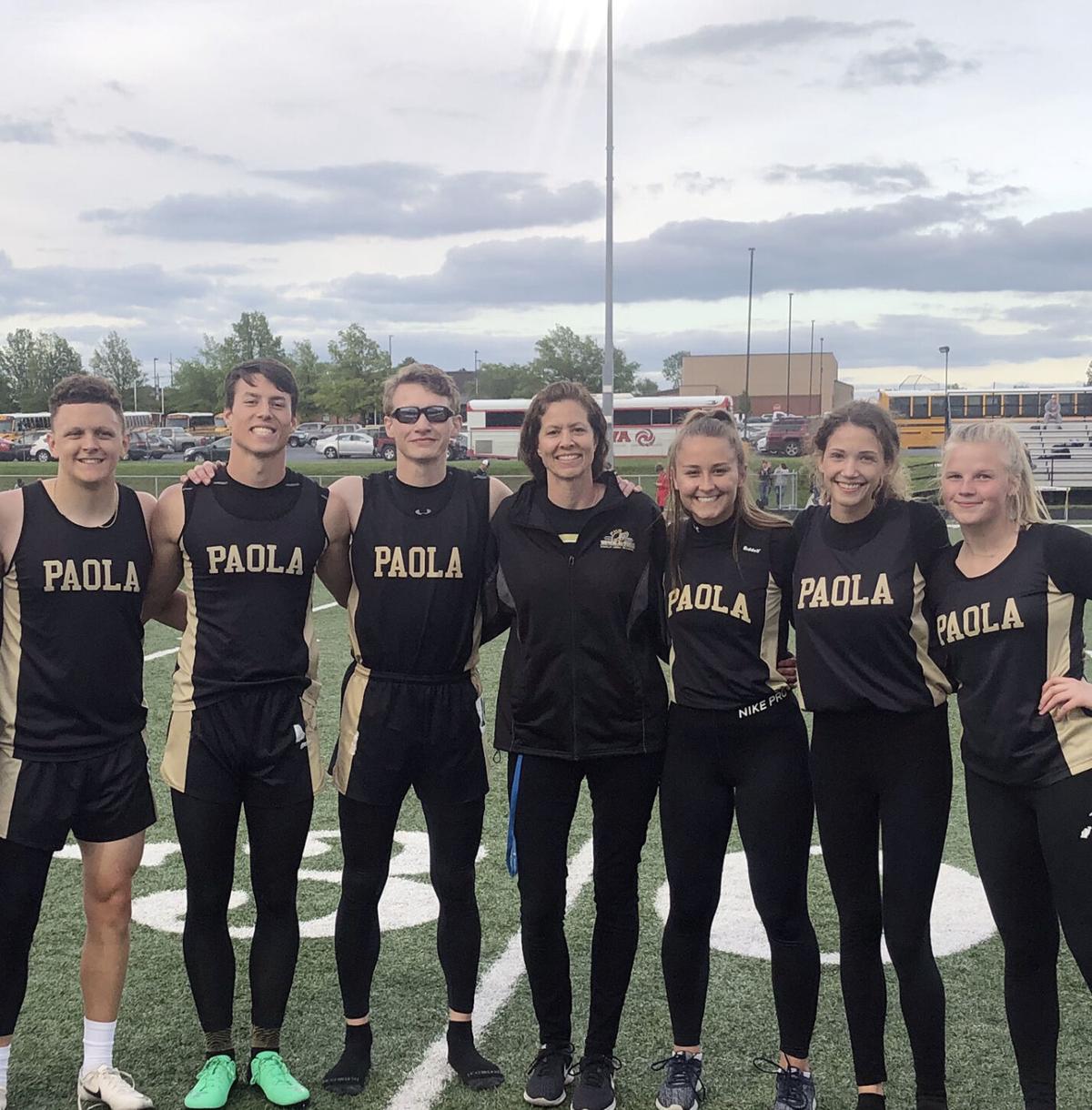 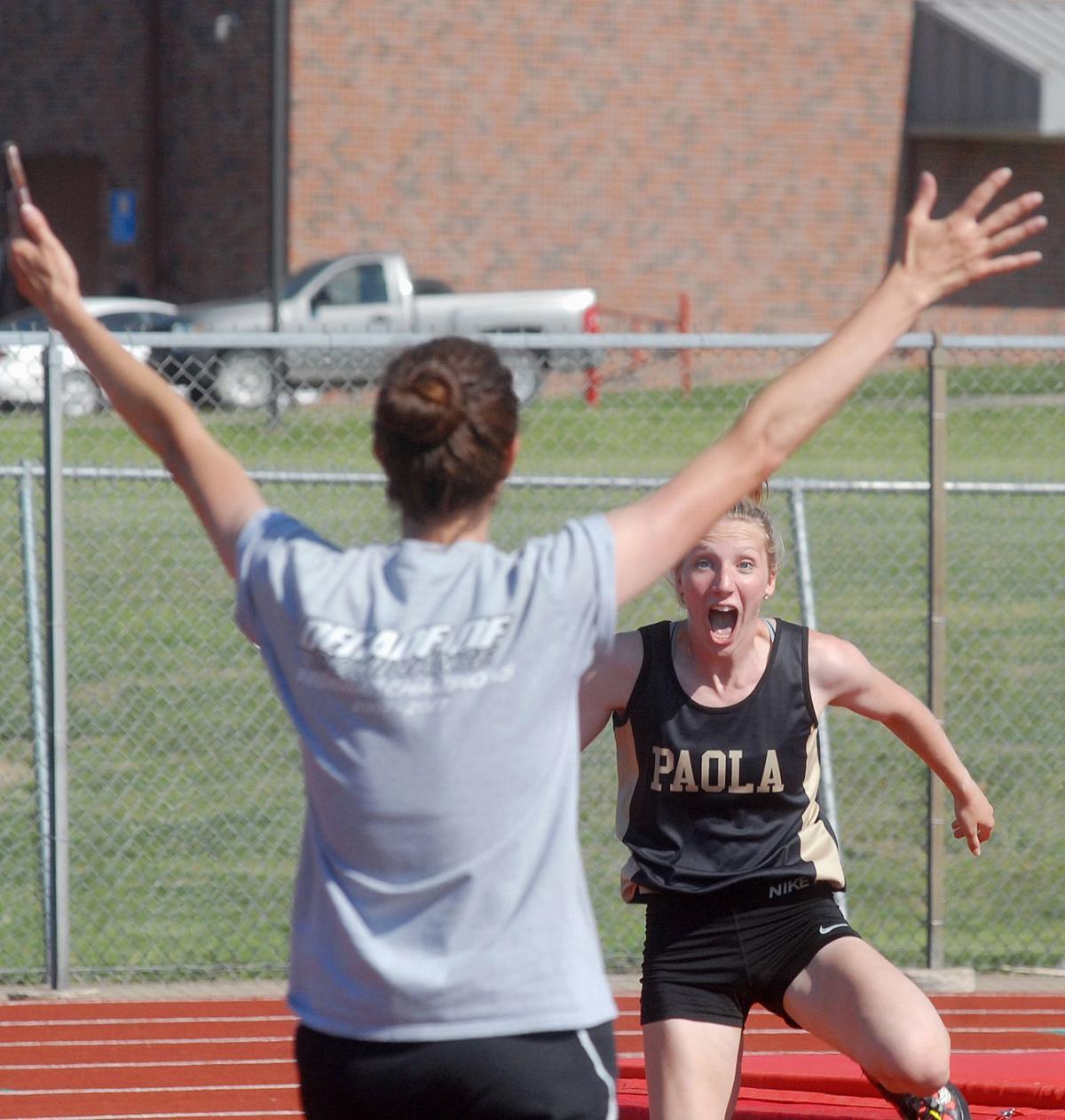 Keely Toman raises her arms in jubilation as Lady Panther Moore Long breaks the school record in the high jump at regionals her senior season. Toman was named the assistant track coach of the year.

Keely Toman raises her arms in jubilation as Lady Panther Moore Long breaks the school record in the high jump at regionals her senior season. Toman was named the assistant track coach of the year.

Toman has coached the hurdles and the high jump for the Paola High School track and field team for two years. She was entering her third season with the program this spring.

“Keely is invaluable to our track success,” Smith said. “Her being a former NCAA Division 1 competitor at the University of Kansas brings a lot of experience to Paola track. She is a tireless worker spending weekends and summers helping our student athletes improve in the hurdles and high jump.”

News of the award came as a complete surprise, Toman said.

“I was completely shocked when coach Smith told me,” Toman said. “It was only my second year of coaching, and I was blessed to step into a very successful program with a great coaching staff and some very talented athletes.”

Toman said the award was a reflection of the dedication of the student-athletes on the team.

“I only received this award because of some very hard working kids who had a goal at the beginning of the year and worked hard all season to get to the state meet and bring home some hardware.”

Three of Paola’s six hurdlers qualified for state in 2019, and all of them ended the season on a strong note, Toman said.

“I was so proud of my hurdles,” Toman said. “Three of my six varsity kids made it to state. The other three ended the year with their best times of the season, so all of them were able to walk off the track with their heads up. Two of them were beat out at the line to just miss qualifying.”

Shelby Ratner was fourth in the 100-meter hurdles, winning a state medal for the Lady Panthers.

Seth Richmond, who won gold in the javelin, qualified for state in the 110 hurdles and the 300 hurdles.

Chase Robbins qualified for state in the high jump.

Morgan Clark was a state qualifier in the high jump.

The Paola boys brought home a state trophy for third place, adding to the programs collection. The Lady Panthers were ninth in the state.

The Lady Panthers were state runner-up in Class 4A in 2018. The Paola boys were 10th in the state meet.

Moorea Long placed fourth in the high jump. She broke the Lady Panther high jump record at the Frontier League Championships held at Ottawa. Long set the record and broke her own record twice, all in three consecutive jumps.

Toman was there to cheer Long on throughout the dramatic performance, along with teammates Aziza Patillo and Morgan Clark.

Amanda Meeks qualified for state in the 100-meter hurdles.

Eilts signed with Pittsburg State to run the hurdles and relays.

Richmond signed with the University of Colorado at Colorado Springs to compete in the decathlon.

Meeks signed to compete for Neosho Community College in the 100- and 400-meter hurdles.

Patillo went to Baker University to compete in the hurdles and the relays.

Long signed with Baylor University for track and field, competing in the high jump. She was a four-year state-qualifier and medalist in the high jump for the Lady Panthers.

“She was critical in the development of state placer and current Baylor high jumper Moorea Long,” Smith said. “Moorea broke both the school and conference high jump records. She also helped state placer and school-record holder Aziza Patillo achieve her goals in the high hurdles.

“This past season she was important in the development of UCCS track athlete Seth Richmond improve in the hurdles,” he said. “With her guidance Carson Eilts a Pittsburg State track athlete broke the conference and school record in the low hurdles and also placed in both hurdles at the state track meet. She really cares about the success of each athlete and works on ways for them to improve on a daily basis. She is very worthy of this award.”

Toman was a state champion in the high jump in Missouri. She was all-state in the 100-meter and 300-meter hurdles. Toman still holds her high school’s record in the high jump.

She was a Big 8 Conference champion and All-American in the high jump in college with the University of Kansas Jayhawks. She is ranked as an all-time Top-10 performer at the school.

“I was so excited to get back into it,” she said. “Later I was told I would be doing hurdles as well, so it could not have been a more perfect fit.

“Track was such a rewarding part of my life throughout high school and college,” she said. “I never thought coaching these events that I loved could be as rewarding as they are. I love teaching the kids what I know and when something clicks for one of them, I am as proud and excited for them as if they were my own kids.”