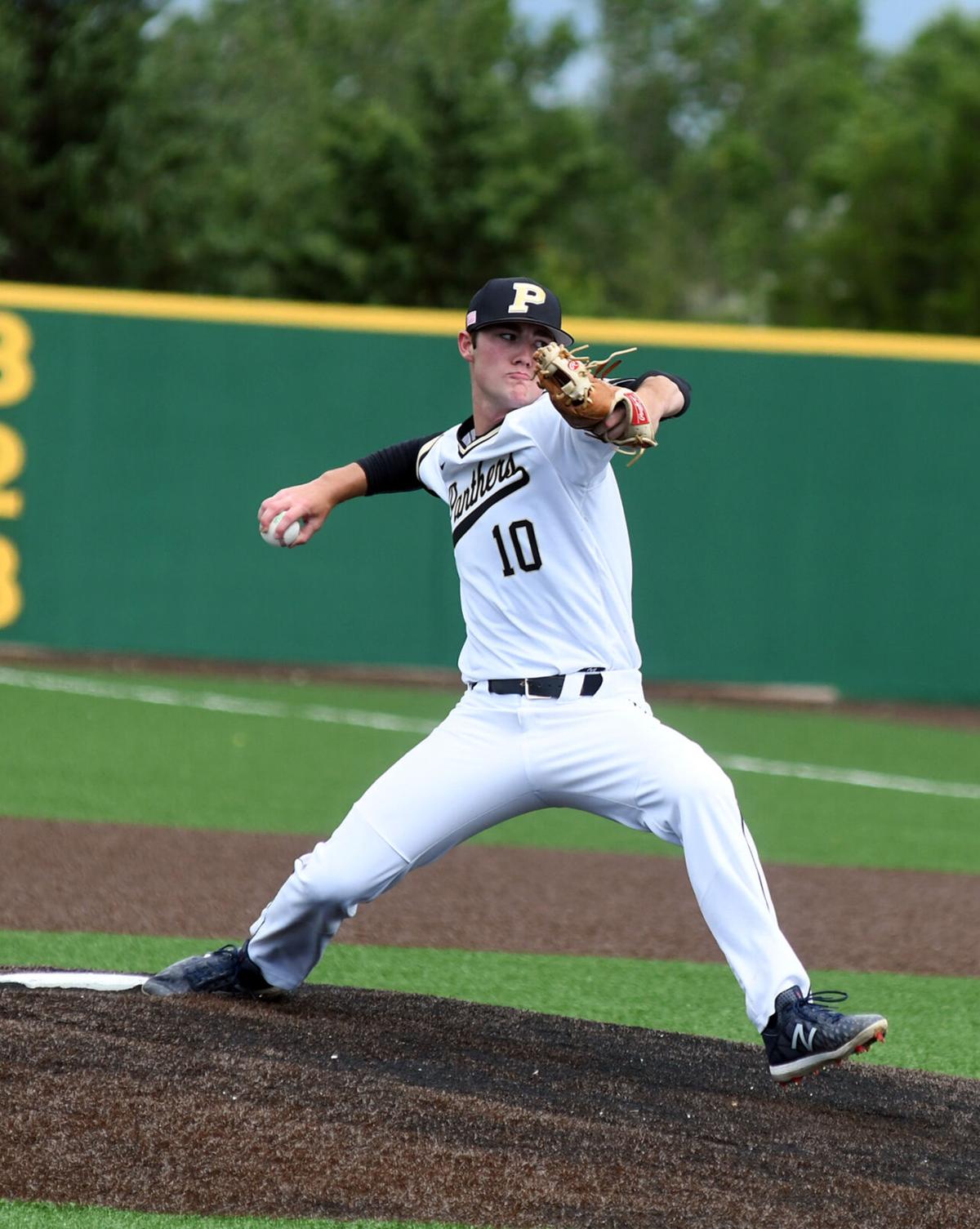 Garrett Williams comes out of the stretch to fire a pitch home for the Paola Panthers. He was 5-1 on the season. 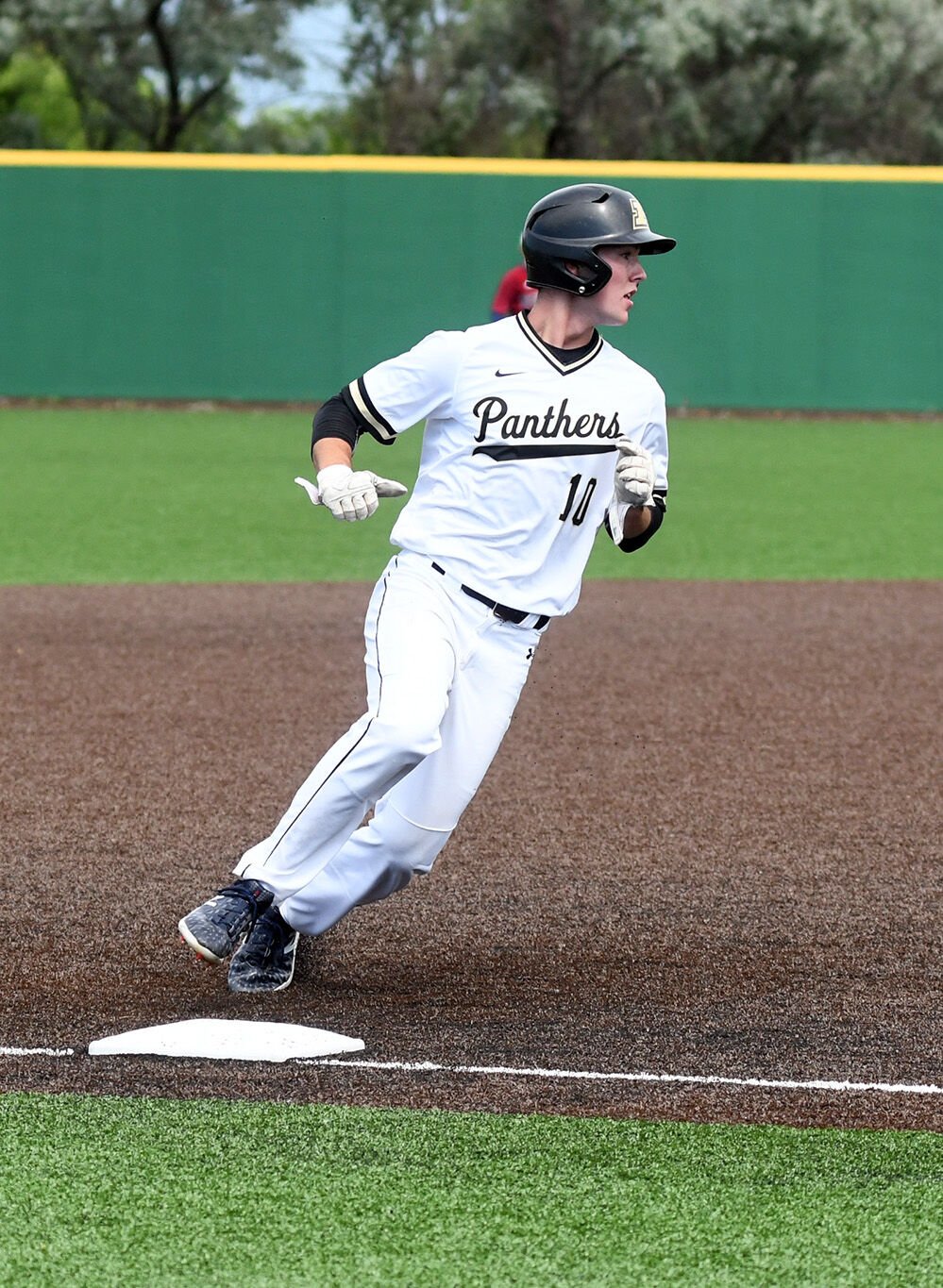 Garrett Williams, a Paola senior, turns the corner at third base during the Class 4A state tournament.

Garrett Williams comes out of the stretch to fire a pitch home for the Paola Panthers. He was 5-1 on the season.

Garrett Williams, a Paola senior, turns the corner at third base during the Class 4A state tournament.

PAOLA — Garrett Williams was one of the fiercest competitors, not just in the Frontier League, but across the state.

With a big game on the line, the Paola Panthers put the ball in his hands.

Williams delivered, going 5-1 on the season with a 2.64 earned run average.

He was named the Tri-County Spotlight Baseball Pitcher of the Year.

“Being named the pitcher of the year is an honor that I am truly grateful to receive,” Williams said.

Williams was a first-team Spotlight selection at pitcher and outfield.

He struck out 64 batters in 42 innings pitched. Williams hit .293 with three doubles, two triples and a home run. He drove in 16 runs and scored a team-leading 35 runs.

Williams got on base 43 percent of the time. He was a disciplined hitter, drawing 16 bases on balls on the season.

He made 30 putouts with four assists. Williams also showed off his arm by doubling off a runner from the outfield.Williams helped lead the Paola Panthers to a 22-3 record. He turned in a gutsy performance at state, pitching the opener against the Eudora Cardinals.

He was nursing a sore rotator cuff and had been receiving treatments on the shoulder. Williams was strong for four innings and was pitching on guts in the fifth and sixth frames.

Paola struck for four runs in the first inning. The lead was down to one run, 5-4, heading into the bottom of the sixth.

Williams kept that one-run advantage with some big time pitches in the top of the sixth. With runners at first and third, he got a strikeout and then pitched out of the frame. Paola added two insurance runs in the home half of the sixth and went on to win it 7-4.

“This year was a fun one for a number of reasons, especially it being my senior year,” Williams said. “It was great to play after missing the season last year. Then we capped off an amazing run with just three losses.”

The Spotlight awards say a lot about the heart on the Paola baseball team, Williams said.

Pitcher of the year is an award with his name on it, but it is an honor won by the entire program, he said.

“This award speaks volumes for the amount of work that my teammates and I put in this year,” he said. “I couldn’t have done it without them, and I appreciate everything they did to help me achieve this honor.”

Williams had a sore shoulder the second half of the season but would not let that stop him from delivering, especially in the clutch, Paola coach Tony Brummer said.

“Garrett competed the last month of the season with some arm soreness,” Brummer said. “Garrett not only pitched, he helped get equipment out every day and put it up. His leadership through his actions was amazing all year. I tell my own boys to watch him and learn from him.”

Paola set out with a simple, yet lofty goal this season — to win it all, Williams said.

The Paola Panthers ended their state run with a victory, placing third in the Class 4A state tournament.

“The plan from the very beginning was to win state this year,” he said. “It was sort of win or bust for us, and we had every intention of bringing home a state title.

“Obviously, that didn’t happen, but we still accomplished a lot by winning league, regionals, and placing third at state,” Williams said. “None of that could’ve happened if we didn’t come together the way we did.”