Members of the Spring Hill baseball team pose for pictures with the Class 4A regional championship trophy after a 4-3, extra-inning victory against rival Paola. The Broncos went 3-0 in the state tournament, defeating Scott City 5-0 in the title game in 1994 to become the first team in Kansas to win state baseball titles in three consecutive decades. 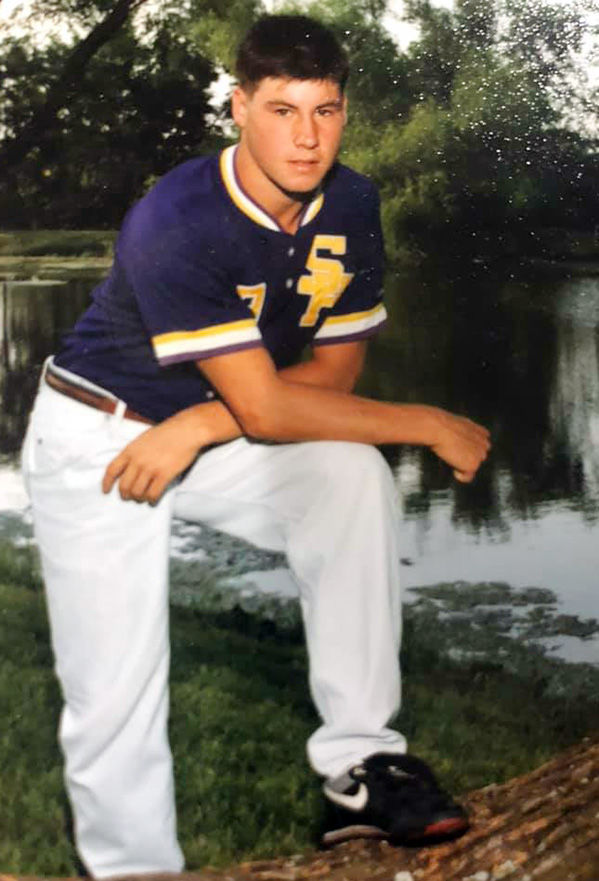 Spring Hill pitcher T.J. Cheatham, a senior in 1994, notched all three victories in the state tournament for the Broncos.

Members of the Spring Hill baseball team pose for pictures with the Class 4A regional championship trophy after a 4-3, extra-inning victory against rival Paola. The Broncos went 3-0 in the state tournament, defeating Scott City 5-0 in the title game in 1994 to become the first team in Kansas to win state baseball titles in three consecutive decades.

Spring Hill pitcher T.J. Cheatham, a senior in 1994, notched all three victories in the state tournament for the Broncos.

MANHATTAN — T.J. Cheatham had a weekend at the Class 4A state baseball tournament 26 years ago that most pitchers never even dream about.

Cheatham, who was a senior in 1994, recorded all three victories in the state tournament as Spring Hill defeated Scott City 5-0 to capture its third championship.

The Spring Hill Broncos added a chapter to the state baseball history books in the process, becoming the first team in Kansas to win state championships in three straight decades. Spring Hill won state titles in 1972, 1987 and 1994.

T.J. Cheatham and B.J. Wycoff combined for a one-hitter in the championship game.

Spring Hill struck for four runs in the first three innings, and the pitchers took care of the rest.

Wycoff, a left-hander, pitched two innings in the championship game. After working seven innings in the semifinals earlier in the day, he had just two innings left for the finale. Pitchers are limited to nine innings per day or 12 in a 48-hour period.

Spring Hill was leading 2-0 when Scott City had one out and runners at second and third. Wycoff rose to the occasion, striking out the next two batters to leave both runners stranded on base.

Scott City had a walk and a double in the inning. It was the last time the Beavers would have two runners on base.

Cheatham took over in the third inning and pitched five no-hit innings to nail down his third victory of the tournament, putting a bow on the program’s third state championship.

Cheatham allowed just two hits in 11 innings of work in the state tournament. He struck out 19 and walked six. Cheatham did not yield a single run in the tournament.

“All year long we had different people coming through for us,” Spring Hill coach David Londene said. “It was never just one person.

“We got here and we won this thing as a team,” Londene said. “We had a lot of guys come through for us here. I think anytime to have a tradition in any sport, it is something that is going to help you.”

Spring Hill, 22-3, entered the tournament as the No. 1 seed. The Broncos opened the state tournament with a victory against the Lansing Lions (11-9).

Senior David Roberts singled in the semifinals, leading to the game-winning run in a 3-2, extra inning victory against Valley Center.

The Spring Hill Broncos not only got clutch pitching during the tournament, but also big base hits when they needed them.

Brad Wright reached on an error in the first inning of the state title game against Scott City. He went to second on a sacrifice by Matt Filsinger.

Cheatham made Scott City pay for the error with a double to score Wright. Spring Hill manufactured another run in the inning. Cheatham stole third base and scored on a sacrifice fly by Courtney Walker, making it 2-0.

Mike Stewart drew a two-out walk in the third inning and moved to second base on a balk. Wright singled to score Stewart for a 3-0 lead.

Cheatham walked in the fourth inning. The Broncos would play small ball to plate another run. Cheatham stole second base and went to third on an error. He scored on a sacrifice fly by Walker.

Spring Hill opened the fifth inning with a triple. Brock Smothers entered the game to pinch run. Gary Benedict hit a ground ball to short, scoring Walker for the final score of 5-0.

Wright reached base eight times in the state tournament. He scored three runs and drove home two runs, including the game-winning run against Lansing in the opening round.

Walker was an anchor at first base. He hit .363 with four hits in 11 trips to the plate with three extra base hits. He hit a two-out, two-run double to tie the score against Valley Center in the semifinal game. Wright drove home two runs on sacrifice flies in the championship game.

Wycoff scattered nine hits in 12 innings of work during the state tournament. He picked up a save in the opener and allowed just two runs to put Spring Hill into position to win the semifinal game. He also worked two scoreless frames in the championship game.

Spring Hill honored super fan John Sailor, who had followed the program for more than 30 years, with a game ball autographed by the team. The Broncos presented the ball to Sailor prior to the state title game.

David Roberts singled to drive home T.J. Cheatham in the bottom of the eighth inning to give Spring Hill a 4-3, extra-inning victory against the rival Paola Panthers in the Class 4A regional championship game.

“I’ve wanted that hit for four years,” Roberts said. “That single was the greatest thing I’ve ever done in sports.”

Cheatham hit a solo home run in the bottom of the fourth inning and the Broncos led 2-0 at home through five innings.

Paola got one run back in the sixth inning only to watch Spring Hill plate a run in the home half of the inning. The Panthers trailed 3-1 in the seventh inning.

Jeremy Johnson singled to open the frame. Brian Shay entered the game as a pinch runner. Robert Norton doubled to the gap in right center to score Shay. Aaron Browning tied the game with a two-out single to right, sending Norton home from third.

“Man that was a great ball game,” coach Londene said. “It’s a shame both teams couldn’t go to state after playing a game like that.”

It was a classic pitching dual between Cheatham and Paola’s Matt Stallbaumer. During one stretch, Cheatham retired 11 batters in a row and faced one over the minimum through four innings.

Cheatham and Stallbaumer both went the distance in the eight-inning thriller. Cheatham fanned 12 batters. Stallbaumer had 12 strikeouts.

Cheatham went on to play baseball at Wichita State University.

Spring Hill drenched coach Londene with a bucket of water.

Roberts and Cheatham were carried off the field after the regional victory.

T.J. Cheatham, who played for the Spring Hill Broncos from 1991-94, is ranked second on the all-time home run list in Kansas.

Cheatham is ranked first in career triples (13) and career doubles (36).

Jordan Miller, 2008, is ranked third in career triples with seven.

Mark Swope, 1987, is ranked first in victories in a season with 13. He also holds the state record for most wins without a single loss.