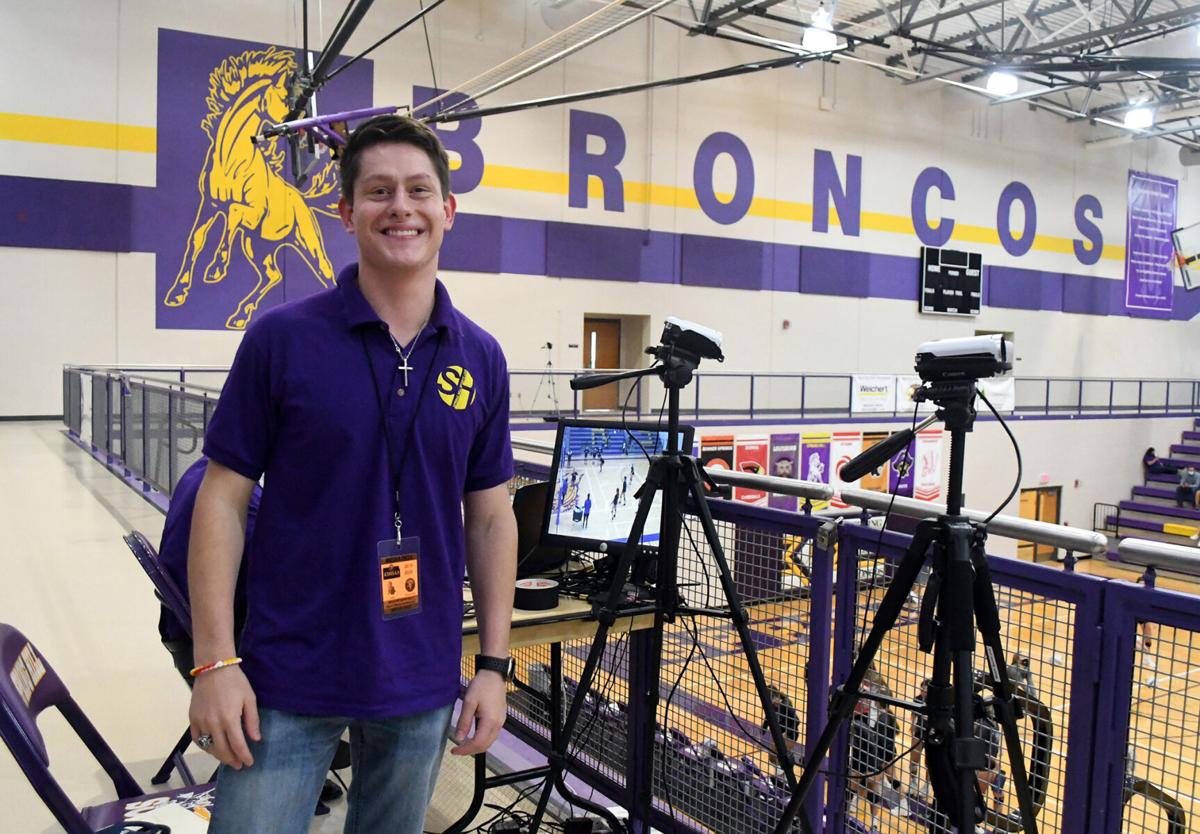 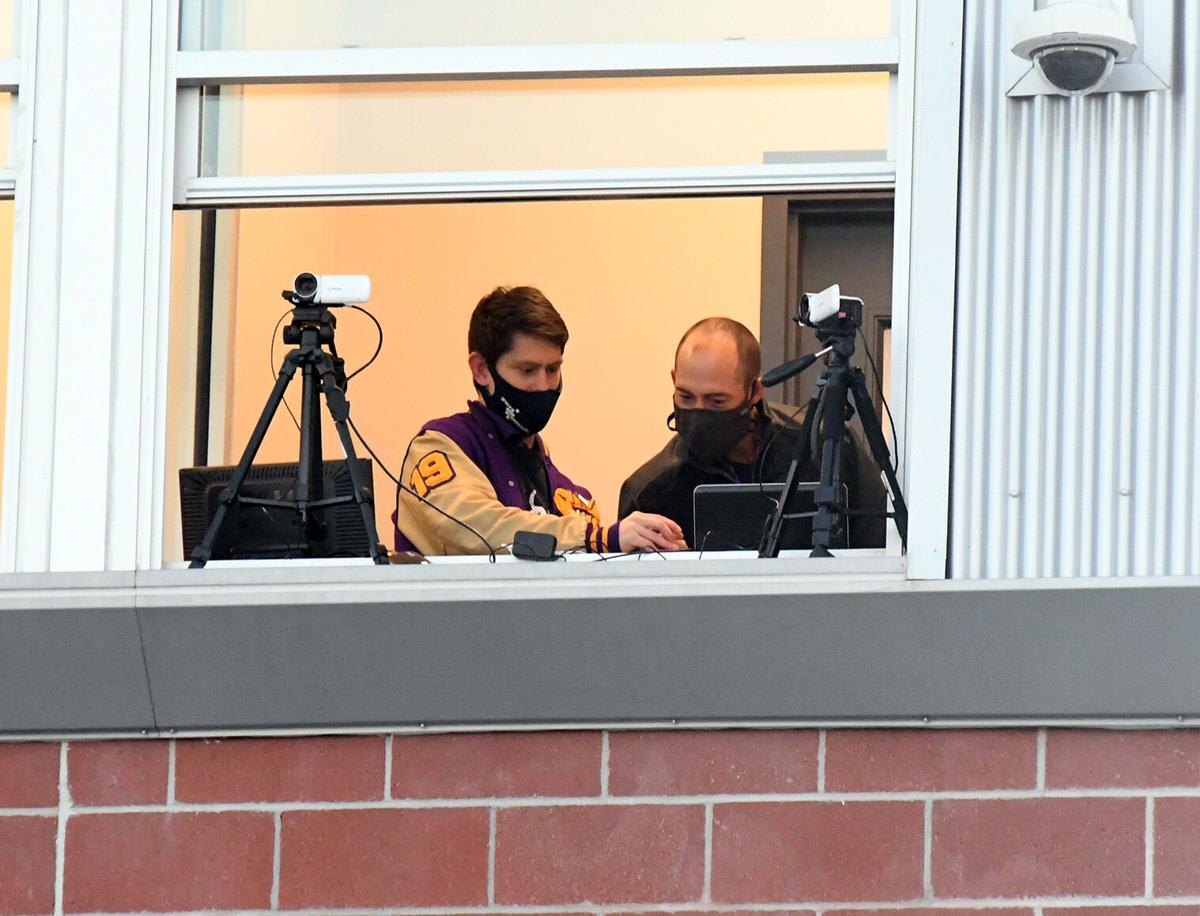 Kaden Carbajo and Brice Kessler go over notes and check equipment prior to broadcasting a Broncos football game for Spring Hill Sports Live.

Kaden Carbajo and Brice Kessler go over notes and check equipment prior to broadcasting a Broncos football game for Spring Hill Sports Live.

SPRING HILL — Kaden Carbajo has always had a deep love for sports.

Carbajo, a 2019 graduate of Spring Hill High School, competed for the Broncos in cross country, wrestling and track and field.

Carbajo is in his second season with Spring Hill Sports Live. He works the video camera for live coverage of Spring Hill football, volleyball, soccer and basketball.

He is the son of former Spring Hill wrestling coach Tom Carbajo, taught in the district and has shot videos for Spring Hill Middle School. Kaden’s mother, Janel, taught in Spring Hill and was an assistant volleyball coach.

“I was coming home from college in Johnson County, and the principal at the high school, Marc Williams, asked if this was something I would be interested in,” Carbajo said. “I said, yes. I was all in.”

Kaden grew up in the gymnasium with his father, Tom, videotaping games for Spring Hill Middle School.

“The only reason I would go to the middle school games when my dad was filming was so I could ask him for money to go the concessions stand,” he said. “I was never interested in doing any of this. I always wanted to be around sports. I didn’t think this would be in my future, but it is and it has been a cool experience.”

Now, Kaden is also behind the lens, doing the video for Spring Hill Sports Live, working with broadcaster Brice Kesler.

“I had never done any video camera work like that,” he said. “It was something new. I knew I would be around sports and that was something I was interested in. It has been fun. I have some of my friends who all say hi to me at the games. It is kind of cool to see the people there and all of the parents that I have known.”

When Spring Hill Sports Live went looking for a cameraman, they asked Williams if he could think of someone, and he suggested Carbajo, owner B.J. Harris said.

“He is the most famous person on our broadcast team,” Harris said. “Everywhere we go, everyone knows Kaden and comes up to him to say hello. He is exactly the type of person we were looking for. We want to be the community broadcast.

“I am happy for Kaden,” Harris said. “I am not sure what he is going to do. He wants to be involved with sports. No matter what he does, he will be successful. He is kind and generous and is so positive, he is just a breath of fresh air.”

With restrictions on attendance this season due to COVID-19, the live feed from Spring Hill Sports Live gives family and friends a way to follow their Spring Hill Broncos without being there in person.

Carbajo is still at all of the games, but this time he is on the other side as a professional journalist.

“It is a fun thing,” he said. “It is a new experience. I was an athlete, so I would be on the field competing. Now, to see some of my friends and people I went to school with doing good things on the court and on the field has been great. I felt pretty special when I got my sports pass with the KSHSAA symbol on it.

“The support has been amazing,” he said. “We hear from a lot of people on Facebook. They have found the link and follow us now and love it.”

Carbajo has learned a lot of the video work on the job. He got an introduction by fire at the Spring Hill Football Jamboree in 2019, prior to the start of the season.

“They just showed me really quick, this is how you do it,” he said. “I learned how to operate it at that first scrimmage.”

Soccer is one of the more challenging sports to video, Carbajo said.

“Our soccer field, where it is set up, the sun is right in my eyes,” he said. “That makes it tough to track the ball.”

Carbajo is a sports fan and there are times he has to remember to focus on the action and not the celebration.

“You have to hold stuff in,” Carbajo said. “If there is a big game that we just won, it is hard not to bring that student fan back in me. When the volleyball team made it to state for the first time in years, I was pumping my fist.”

Spring Hill Sports Live was named the Business of the Year by the Spring Hill Chamber of Commerce.

Carbajo is taking general studies at Johnson County Community College. Not only is he the son of two former coaches and teachers, Carbajo’s sisters, Kelsey and Macy, coach cross country at Olathe West High School.

Coaching could be in his future, Carbjao said.